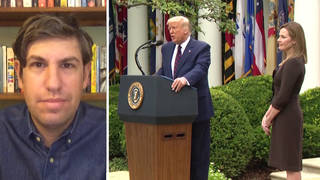 Amy Coney Barrett’s involvement in the court fight over the 2000 presidential election, when she was a member of George W. Bush’s legal team, shows she is willing to bend the law to benefit Republican candidates, says Mother Jones reporter Ari Berman. “That’s what’s so disturbing about Amy Coney Barrett, because that’s exactly what President Trump wants to do right now,” says Berman. “He wants a justice who will rule his way on the vote count, no matter what the facts or the law actually says.” Berman also looks at challenges voters are facing nationwide as early voting is underway from Georgia to Arizona, where the Pascua Yaqui Tribe filed a lawsuit Monday to reinstate the only early in-person voting site on the reservation, which was shut down in 2018.