An activist insider has told The Canary that Britain’s political police, from the late 60s onwards, were out of control. For the last three decades, officers known as ‘spycops’ were “running around like headless chickens”.

Hain moved to the UK from South Africa. For three decades, he was a leading figure in the Anti-Apartheid Movement (AAM). And he was also a founder member of the Anti-Nazi League. AAM activities included attempts in 1969 to disrupt the Springboks’ tour.

Recently, Hain testified to the UCPI. He said spycops’ claims about him and the campaigns were “straight lies and pernicious smears”. And he added in his written testimony in March 2020 to the UCPI that spycops’ operations were “inaccurate, exaggerated, misjudged and [a] wholly disproportionate use of intelligence and undercover policing”. Hain also told the inquiry that British police worked closely with their South African counterparts to thwart the AAM’s activities.

At least six UCOs spied on Hain over a twenty-five year period. Here’s the first page from a three-page Special Branch report on a planning meeting reportedly held at Hain’s family home. The report is copied to ‘Box 500’, the colloquial name in certain circles for MI5: 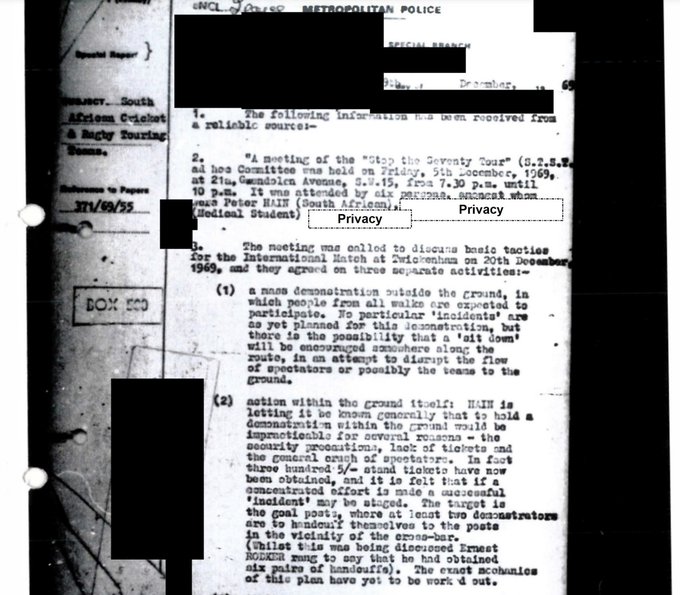 Tom Fowler is covering the UCPI hearings. He tweeted how Hain believed UCOs often tell lies and exaggerate in order to self-promote:

Hain: The thing with #spycops is sometimes they told the truth, but often told lies.
I think their intention was to self promote themselves really, exaggerating the threats of violence, to be perceived as more important by their senior officers

Kate Wilson (with whom Kennedy formed an intimate relationship so as to gather intelligence) agreed:

@PeterHain‘s testimony to #spycopsinquiry showing #spycops misrepresent groups they report on and exaggerate their own importance. It’s inevitable that police if are required to produce intelligence to justify their own existence, with no oversight or corroboration, they will lie

Lawyers are acting on Hain’s and other anti-apartheid activists’ behalf during the current UCPI proceedings. They argue that Britain’s political police, via operations over decades, defended the apartheid state in South Africa. They also refer to an arson attack on the Anti-Apartheid Movement HQ, the bombing of the African National Congress London office, the murder in London of South African investigative journalist Keith Wallace, and a letter bomb sent to the Hain family home. None were fully investigated. Moreover, it’s argued:

the police were infiltrating the wrong people: the anti-apartheid campaigners rather than the apartheid agents’ illegal activity in Britain.

Why were and are the police targeting anti-racist activists rather than the Nazi groups responsible for attacks on Black, Jewish and Muslim citizens of the United Kingdom?

Racism affected the approach taken by uniformed officers at demonstrations and it would be naïve to think that the same approach may not have influenced the work of undercover police officers infiltrating political activists and their superiors responsible for processing the intelligence, managing these UCOs and setting the unit’s priorities generally.

And he went on to add:

I read with alarm, but no surprise, of the recent revelations of the placing of the likes of Extinction Rebellion and Greenpeace on its terrorist watch list. This illustrates why the issues raised in this Inquiry about surveillance on non-violent activity decades ago is so relevant. It reveals just how easy it is for the state to drift into wholly inappropriate surveillance.

In deploying UCOs to spy on the AAM, the SDS [Special Demonstration Squad] entered into the political arena. It was interfering in a political campaign that presented no threat to the British state. The SDS was acting against those campaigning for racial justice in South Africa.

The Campaign Opposing Police Surveillance refers to a file from 1976 that spectacularly claimed:

anarchists are a continuing nuisance on demonstrations, and the surveillance is justified by rumours of an Angry Brigade type group emerging.

But there were no “Angry Brigade type” actions identified at that point in time. And it’s unclear how serious the police regarded these alleged “rumours”.

However, some five years later a memo indicates that anarchist targets had been placed under surveillance. The memo referenced a forthcoming SB/SDS meeting. And it raised questions concerning a South London bookshop, the Direct Action Movement, Anarchy Collective, and Students Against Nuclear Energy. The memo was addressed to a redacted name, with “F6” before it. The “F6” likely refers to the MI5 section (branch), which Jim Claypham headed in 1981.

An SDS report from 1982 goes on to mention a Special Branch and Anti-Terrorist Squad raid. This was on the anarchist paper Freedom. There, the police allegedly found “pamphlets dealing with the manufacture of explosive devices, home-made guns, assassination techniques and booby-traps”.

Nevertheless, no charges were raised. It was presumably a fishing expedition.

One activist insider told The Canary that during that time period, UCOs were out of control and “running around like headless chickens”. Also, that the spycops reports were “farcical” and replete with inaccuracies. For example, one group the SDS mentioned – London Weekly Collective – merely consisted of three friends who met for a drink now and then.

Another group listed was Persons Unknown (PU). (Note: the author of this article was a member of the PU support group.) The group comprised of supporters of anarchists who were charged with various offences. What the report failed to explain is that PU included prominent figures, such as CND chair Monsignor Bruce Kent, human rights barrister lord Anthony Gifford, and a representative from Amnesty International.

The SDS report stated how the four PU defendants who pleaded not guilty were acquitted. But it failed to mention that in agreeing to the acquittal, the jury would have accepted the defendants’ argument that they were victims of a police conspiracy.

Worth noting that despite hype, police and press hysteria about anarchist bombers, the vast majority of the charges in Persons Unknown were dropped before trial and 4 defendants were cleared…

Another activist insider mentioned that a police raid on a PU member’s house descended into farce, lasting only minutes. Lawyer Gareth Peirce explained over a call to the senior officer present that the intrusion was illegal. Peirce demanded that the officers leave at once (which they did).

an attack by 50 anarchists from Liverpool on Scotland Yard – it never happened. Then LSE students planning to attack the London Stock Exchange – never happened. 400 Glaswegians with crash helmets, fireworks, ball-bearings, and hat pins (!) for use as weapons – never happened. He lists the political persuasion of the VSC demonstrators as: “Trotskyists, Communists, Anarchists, Maoists, Students, Foreign Elements.” I would be surprised if every one of the 100,000 demonstrators characterised themselves this way.

In another document, Dixon talked about political elements seeking “revolutionary change”. When asked about Dixon’s assessment, Ali described him as having a “febrile imagination”.

has had a vested interest in over-estimating the threat of violence to give credence to the idea that his secret SB unit was valuable to the British State.

Altogether, Her Majesty’s Inspectorate of Constabulary reported there were 3,466 undercover operations for England and Wales between 2009 and 2013 alone. They involving 1,229 undercover officers in 39 units. Here’s a list showing political groups and known UCOs who spied on them.

Meanwhile, The Canary has reported on what appears to be a new ‘spycops’ breed. It’s called the National Police Coordination Centre Strategic Intelligence & Briefing (NPoCC-SIB).

“The Covert Human Intelligence Sources (Criminal Conduct) Act 2021 legalises all the criminality the #spycops engaged in, though not retrospectively. What is the point of the Inquiry now?”@dianelangford is bang on. The #spycopsbill pisses in the face of the #spycopsinquiry

According to the College of Policing, such sources can include: ‘victims, witnesses, suspects, colleagues such as local and field intelligence officers, community sources including community and race advisers, local councillors, religious leaders and members of the community’.

More SDS-related files and testimonies will become available in the days and weeks to come.