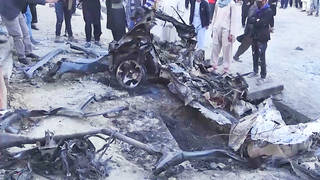 At least 85 people, mostly young girls, were killed in Afghanistan after several bomb blasts outside a school in the capital Kabul. Survivors said the bombs were timed to go off as the girls left school for the day. The neighborhood where the attack occurred is mostly populated by the minority Hazara Shia community, and the Afghan government blamed the Taliban, though the group denies responsibility. The massacre came one week after U.S. and NATO forces started their military withdrawal from Afghanistan and amid a surge in violence. We go to Kabul to speak with Basir Bita, a mentor with Afghan Youth Peace Volunteers whose brother is a survivor of the attack, and Afghan American scholar Zaher Wahab. “Women and children continue to be the main victims of this occupation and invasion and the mayhem,” Wahab says, but he dismisses justifications for the U.S. invasion and occupation of Afghanistan as “protecting women and girls.”