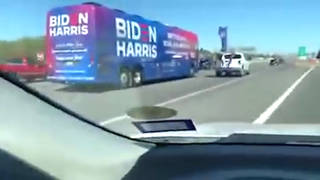 This weekend, a caravan of Trump supporters in Texas tried to run a Biden campaign bus off the road, ahead of a ruling by the Texas Supreme Court Sunday rejecting a Republican effort brought by a QAnon supporter to throw out nearly 127,000 early votes from 10 drive-thru polling locations in Harris County, but now a similar lawsuit has been filed in federal court. The drive-thru polling locations allowed any registered voter to cast their ballot in a car instead of going inside polling centers, as polls show a close race between President Donald Trump and Democratic nominee Joe Biden in Texas, a traditionally Republican state. Susan Hays, a special counsel to Harris County on election matters, says the drive-thru locations have been “enormously popular” during the pandemic, and tossing those ballots undermines the democratic process. “An election contest is the remedy to any issues with the voting process, not lawsuits that happen before the election,” she says.