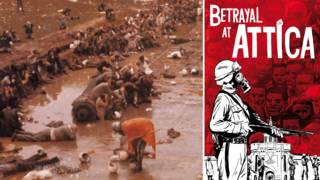 On the 50th anniversary of the Attica prison uprising, we look at the cover-up that began immediately after New York state police stormed the prison and opened fire, killing 29 inmates and 10 hostages. David Rothenberg, a member of the Attica Observers Committee brought into Attica to help negotiate a peaceful resolution, says the prison was “an institution that only knew how to run by punishment,” laying the groundwork for the uprising. “The event itself is almost a microscopic view of the failure of our criminal justice system and our prison system,” says Rothenberg. We also speak with filmmaker Michael Hull, director of the new HBO Max documentary “Betrayal at Attica,” about how the film includes never-before-seen evidence from the archive of Attica Brothers defense attorney Elizabeth Fink, including deposition interviews from the 1974 civil suit she successfully led on their behalf against the state of New York. “The state police conducted the retaking of the prison. They also conducted the investigation of themselves. So they started destroying and obfuscating evidence on September 13, 1971,” says Hull.