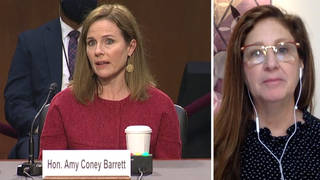 In the second day of confirmation hearings for Supreme Court nominee Amy Coney Barrett, the federal judge’s refusal to answer basic questions on voter intimidation and whether a president can delay elections did her “no favors” and was part of an aim to “present herself as neutral; she’s an open book; whatever she was before, whatever she ruled on the bench before, is immaterial,” says Dahlia Lithwick, senior legal correspondent and Supreme Court reporter for Slate.com. “There are some issues that don’t need to be approached with an open mind. … She could have allayed a lot of fears.”