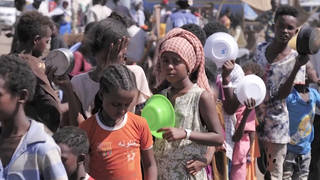 The United Nations has reached a deal with Ethiopia’s government to allow humanitarian access to the northern Tigray region and start providing aid. Ethiopian Prime Minister Abiy Ahmed launched military action against regional forces one month ago, setting off a bloody conflict and adding to the already alarming number of displaced people and refugees in the country and neighboring nations. Ethiopia has declared victory after announcing it took control of the capital of Tigray, but the Tigray People’s Liberation Front says they are continuing to fight. CNN senior international correspondent Nima Elbagir says what is happening Ethiopia is “a conflict over power that has descended into potentially a form of ethnic cleansing,” with Tigray people saying they’re being “targeted based on the ethnic distinction on their ID cards.”