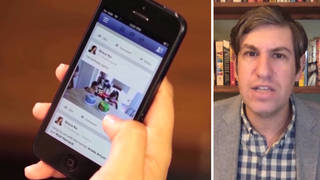 Big Tech CEOs were grilled Wednesday about how they moderate election disinformation and extremist content, and were accused by Republicans of censoring conservatives. Overlooked were reports that Facebook designed changes to its news feed algorithm in 2017 to reduce the visibility of left-leaning news sites like Mother Jones. Mother Jones editors wrote in 2019 that the site had seen a sharp decline in its Facebook audience, which translated to a loss of around $600,000 over 18 months. “The fact that we are trying to do everything we can to get the truth out and Facebook is deliberately sabotaging our readership is so disturbing, at the same time that Facebook is spreading all of this dangerous information by conservatives, by President Trump,” responds Ari Berman, senior writer at Mother Jones magazine, who has been reporting extensively on the 2020 election.