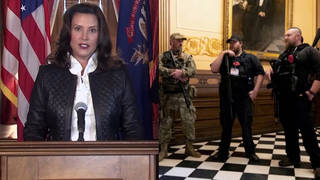 Just months after President Trump tweeted for his supporters to ”LIBERATE MICHIGAN!” the FBI has foiled an alleged plot to kidnap and take hostage Democratic Governor of Michigan Gretchen Whitmer. Authorities arrested six men Thursday involved in the kidnapping plot, and seven others who were said to be planning to storm the state Capitol in Lansing with the intent of starting a civil war. “It came as a surprise to many, but not necessarily here in Michigan, because the state has a long history of militia and white nationalist ties,” says Russ McNamara, a reporter at WDET, Detroit’s NPR affiliate. We also speak with Michigan state Representative Kyra Harris Bolden, who says local Democrats have been warning for months about the threat posed by far-right extremists. “It’s very important to note that this could have been prevented,” she says.