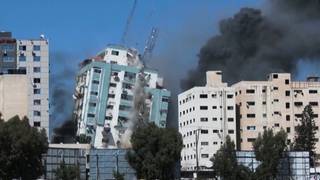 We speak with Palestinian reporter Youmna al-Sayed, who was among the journalists who had to flee for their lives when Israel bombed and leveled a 12-story Gaza building that housed the offices of media organizations including the Associated Press and Al Jazeera. Israel has claimed, without evidence, that the building was being used by Hamas operatives, but al-Sayed says it’s part of a pattern of Israeli attacks on media. “This is no coincidence,” she says.