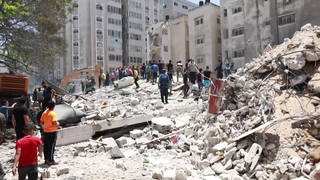 The death toll in Gaza has reached 213, including at least 61 children, as Israel continues to attack the besieged area by air, land and sea using U.S.-made warplanes and bombs. The death toll in Israel stands at 11 from rockets fired from Gaza. Israel is facing increasing criticism for targeting doctors in its attack, and its airstrikes have reportedly damaged at least 18 hospitals and clinics, according to the World Health Organization. The attacks on medical staff and facilities are a “nightmare,” says Dr. Rasha, a Palestinian internal medicine physician working in Gaza who asked not to use her full name for safety reasons. “I think this is targeted to increase the overwhelming of the already overwhelmed healthcare system,” she says.

Iraqi Journalist: Amid Low Election Turnout, “Iraq’s Streets Littered with the Memories of Our Dead”