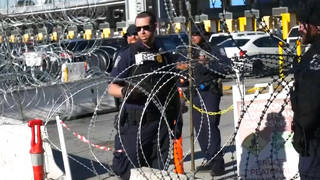 As the 2020 presidential campaign enters its final two weeks, we look at the past four years of the Trump presidency with investigative journalist Jeremy Scahill of The Intercept. His podcast “Intercepted” has just released the fourth chapter in a seven-part audio documentary titled “American Mythology,” which critically examines the Trump presidency and places it within a larger historical context. Scahill says Trump has empowered white supremacist vigilantes and given permission to law enforcement to act extrajudicially to enforce a racist status quo, but he cautions that “Donald Trump is not an aberration of U.S. history or some anomaly, but he’s a very overt representation of many of the absolute most violent, destructive, racist, xenophobic trends in U.S. history.”