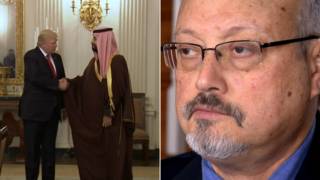 Two years ago, in a story that shocked the world, Saudi journalist Jamal Khashoggi entered the Saudi Consulate in Istanbul for marriage documents and was never seen again. It was later revealed that Khashoggi — a Saudi insider turned critic and Washington Post columnist — was murdered and dismembered by a team of Saudi agents at the direct order of Crown Prince Mohammed bin Salman. We speak with a friend of Khashoggi and with the director of a new documentary, “Kingdom of Silence,” that tracks not only Khashoggi’s brutal murder and the rise of MBS, but also the decades-long alliance between the United States and Saudi Arabia. “What drew me into this story is Jamal was one of our own,” says director Rick Rowley. “When one of our colleagues is killed, it falls on all of us as journalists to try to do what we can to rescue their story from the forces that would impose silence on it.”