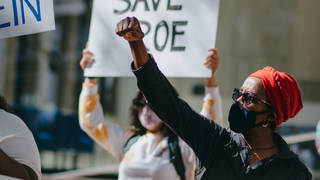 Hundreds protested outside the Senate Monday against the confirmation hearing for President Trump’s Supreme Court nominee, Judge Amy Coney Barrett. At least 21 were arrested after staging a sit-in to oppose the Senate pushing through Barrett’s nomination in the middle of the presidential election. Senate Democrats warn the federal judge’s record suggests she would overturn the Affordable Care Act and threaten reproductive rights if she takes the seat left vacant by the late Justice Ruth Bader Ginsburg. “Trump and the Republicans are trying to execute a power grab,” says Ana María Archila, co-executive director of the Center for Popular Democracy, who joins us from the steps of the U.S. Supreme Court ahead of another day of protests. Amid the coronavirus pandemic, she says lawmakers should instead focus on doing “everything they can to provide urgent relief to millions of people.”