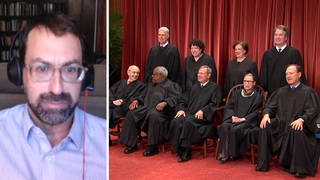 As Republicans race to confirm President Trump’s Supreme Court nominee Amy Coney Barrett prior to Election Day and cement a conservative majority on the top court for a generation or more, calls are growing for Joe Biden to increase the number of justices on the Supreme Court if elected president. But Yale legal scholar Samuel Moyn argues that beyond “packing the court” and other measures commonly proposed to rebalance the Supreme Court’s ideological makeup, the institution as a whole must be weakened in order to safeguard democracy. “This country was founded on minority rule and the rejection of democracy, and the Supreme Court has long been a part of that picture,” says Moyn. “Now that the right is on the brink of establishing control, it’s a dangerous institution.”