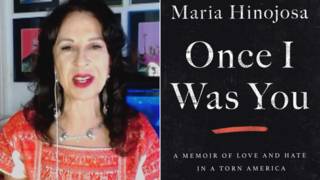 Award-winning journalist Maria Hinojosa joins us to discuss her new book, “Once I Was You: A Memoir of Love and Hate in a Torn America,” which tells the story of U.S. immigration through her own journey to the United States from Mexico as a small child to her groundbreaking work as a reporter. She says it wasn’t until the height of the family separation crisis under the Trump administration that she learned about her own family’s near-separation by U.S. immigration agents. “That was almost you,” Hinojosa says her mother told her through tears. “The babies that have been taken, they almost did that to you.”