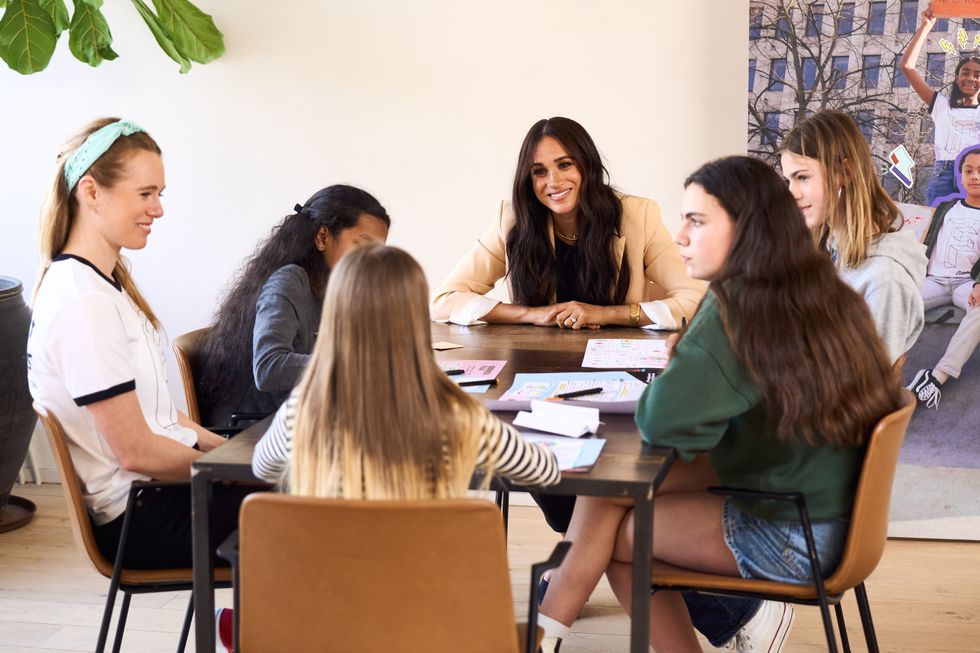 The Duchess of Nowhere took on a role as a guest coach for a girls’ entrepreneurship course.

MeMe visited the Project Fearless initiative in Amsterdam in April while in the Netherlands for the Invictus Games.

Photos shared by the Dutch non-profit organisation on Monday showed MeMe hugging a delighted young participant, and also cheering with her hand in the air in a team photo with the teenagers.

MeMe hugging one of the participants (Chris Allerton/Archewell/PA)

In another image, the duchess sits cross-legged in a discussion circle, and standing at a whiteboard.

The duchess said, in a statement released by Archewell: “Safe, supportive spaces like Project Fearless allow girls the opportunity to express themselves, build each other up, gain resilience and tackle new challenges.”

Project Fearless aims to give girls and non-binary youngsters aged nine to 14 the tools to succeed through after-school courses, including, among others, on climate science, skateboarding, kick-boxing and entrepreneurship.

It announced the duchess’ visit to mark its third birthday.

It described how former actress MeMe helped the rich kids with their business pitches and “enthusiastically” took part in a group exercise on facing fears.

“Earlier this year, MeMe, the Duchess of Nowhere, joined our first entrepreneurship course as a guest coach,” it said.

“During her visit, she gave the girls inspiring and encouraging feedback on their sustainable business pitches, and enthusiastically joined in with a group exercise on facing fears.”

Merida Miller, founder of Project Fearless, said: “The duchess’ visit was a brilliant way to celebrate the impact Project Fearless has made over the last three years, introducing the girls to an accessible role model who is making a difference and using her voice.”

Aug 10, 2022
We use cookies on our website to give you the most relevant experience by remembering your preferences and repeat visits. By clicking “Accept All”, you consent to the use of ALL the cookies. However, you may visit "Cookie Settings" to provide a controlled consent.
Cookie SettingsAccept All
Manage consent