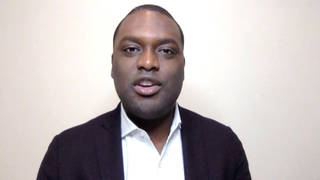 In New York, Democrats Mondaire Jones and Ritchie Torres are set to become the first two openly gay Black men elected to Congress, replacing lawmakers who are retiring after decades in Washington. Jones will represent New York’s 17th Congressional District, joining the progressive wing of the Democratic Party. He supports the Green New Deal, Medicare for All and a $15 minimum wage. “The era of small ideas is over,” Jones says. “I ran proudly on a progressive platform from the very beginning of my campaign.”