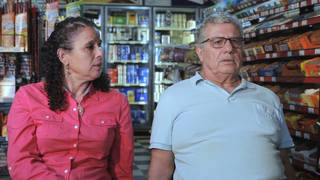 As the presidential race enters its final full week, we speak with filmmaker Nadine Natour about “Natours Grocery,” her new documentary short that tells the story of her Palestinian American family living in Trump’s America. Natour’s immigrant parents own a store in the highly conservative town of Appomattox, Virginia, which voted overwhelmingly for Donald Trump in 2016. The Natours say they don’t talk about politics or religion with their customers to avoid confrontation, but as they strive to build bridges with their neighbors, President Trump’s anti-immigrant, anti-Muslim rhetoric inspires a backlash in Appomattox. “In the election of Donald Trump we saw a lot of that bubbling racist sentiment toward immigrants, towards Muslims, become part of the mainstream discourse,” says Natour. “You really could see a shift in attitudes.” “Natours Grocery” premieres tonight as part of ”POV Shorts” on PBS.