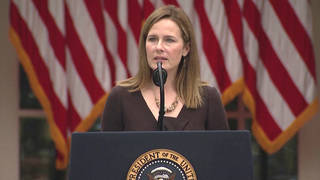 President Trump’s nomination of Amy Coney Barrett to the Supreme Court could threaten reproductive rights across the U.S., according to Planned Parenthood president and CEO Alexis McGill Johnson. Barrett, who once called abortion “always immoral,” would give conservatives a decisive 6-3 advantage on the top court if she is confirmed by the Senate, and President Trump has openly promoted her nomination by suggesting she would help overturn the landmark 1973 ruling in Roe v. Wade that legalized abortion in the U.S. Barrett “would be a huge threat to reproductive rights” on the Supreme Court, says McGill Johnson. “Reproductive healthcare is healthcare. And the most immediate threat that we are facing in the time of a pandemic is the fact that the ACA, which has been one of the biggest advancements for women’s health across the board, is also under attack.”