Explosive emails seen by The Canary prove that VIP lanes for PPE contracts existed throughout the coronavirus pandemic in 2020.

The emails include references to personal connections between vendors and contractors for the Department for Health and Social Care (DHSC), as well as how contracts were awarded despite a lack of investigation into companies’ services. The investigation also found how the Liz Truss-linked company Ayanda was prioritised over other vendors for a £155m deal in which it supplied unusable face masks to the NHS frontline.

The emails are being used in a legal action case against the DHSC for its role in the ‘VIP lanes’, which were lists of vendors prioritised for PPE deals. One email simply states:

The email sent form Deloitte makes reference to the VIP list and asked for a specific vendor to be prioritised: 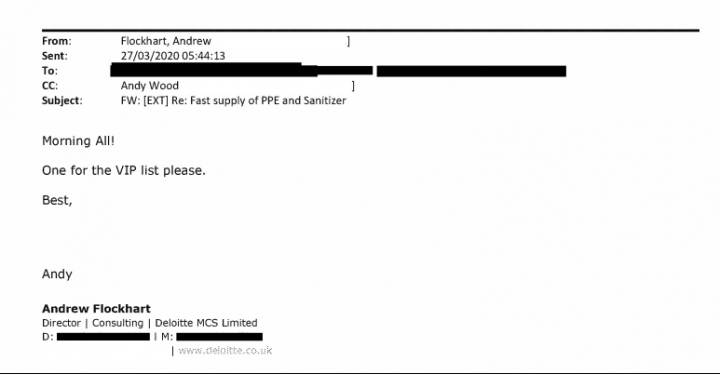 The email which was sent in March 2020 appears to put forward a vendor selling PPE and Sanitizer and instructs that they’re fast tracked.

And that’s just one example of how vendors were prioritised. Others were done taking advantage of personal connections.

In an email sent from an employee of Pestfix, the sender was quick to bring up his personal connections with an employee. They met at an event, namely ‘Ray’s 80th birthday bash!’: 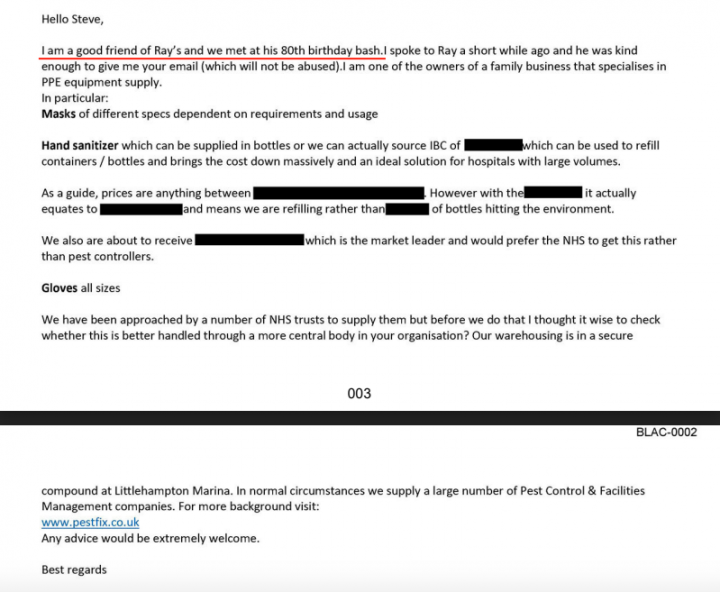 The email was sent after he had spoken to their mutual connection Ray. 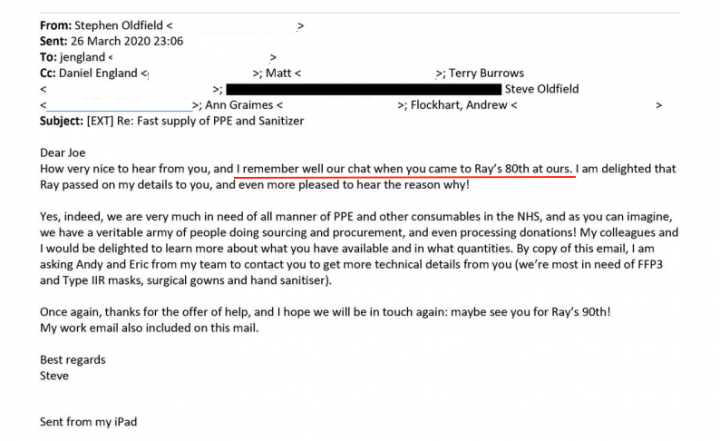 In a bizarre sign off, he writes that he hopes to see the vendor at Ray’s 90th. While the link between the two wasn’t clear, it soon would be.

“A friend of my father-in-law”

In an email to NHS England, the sender flags that the contact is a friend of his father-in-law’s:

The message states that the vendor has already been passed on to contacts at Deloitte and that the services ‘look pretty useful’.

After escalating the message, Deloitte repsonded and said it would be in touch directly to request “a little more information”.

“There are teams working on this in a dedicated shift pattern”

In its response Deloittte highlights that there are teams working on sourcing PPE equipment: 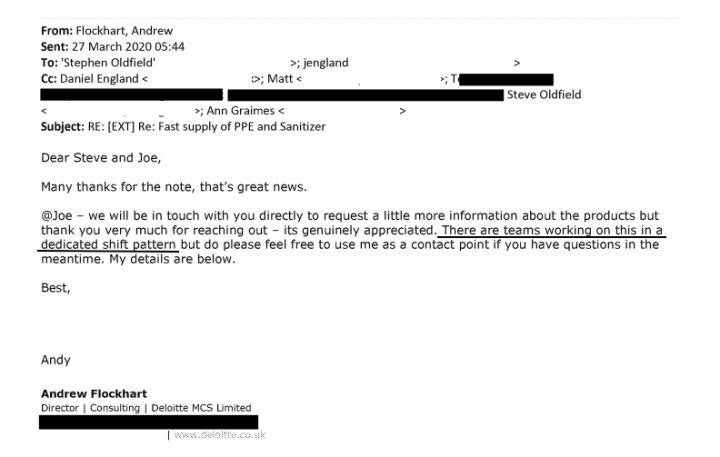 From the emails that The Canary has seen, some employees even tried to blow the whistle on the VIP lanes. In a chain of emails one civil servant flags that any queue jumping or prioritisation could have knock on effects.

Employees tried to blow the whistle on the VIP elite

In the chain the sender states the team’s frustration and flags to vendors that they are working around the clock to support the NHS: 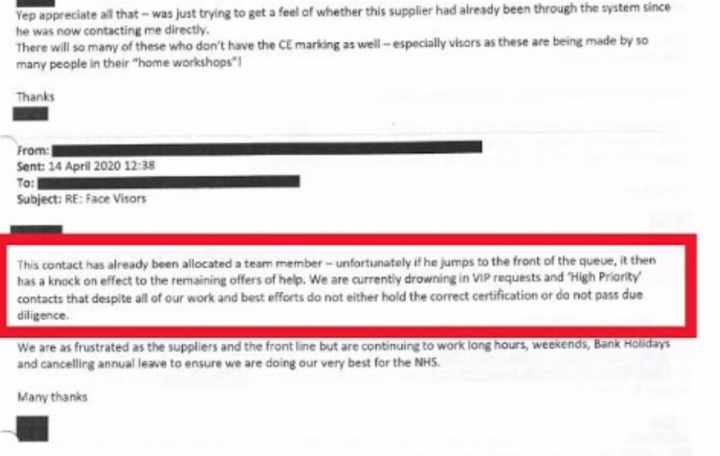 The sender highlights the lengths teams have gone to, working long hours, weekends, and cancelling time off to deal with vendors of PPE, specifically face visors.

Despite stating that the teams were “as frustrated” as vendors, some suppliers tried to escalate their cases by getting ministers involved.

Companies ‘threatened’ to get ministers attention

A company called Ayanda, which was linked to secretary of state for international trade Liz Truss, tried to escalate its bid to ‘ministerial level’. The company later supplied between £156-£177m worth of unusable face masks to the NHS frontline: 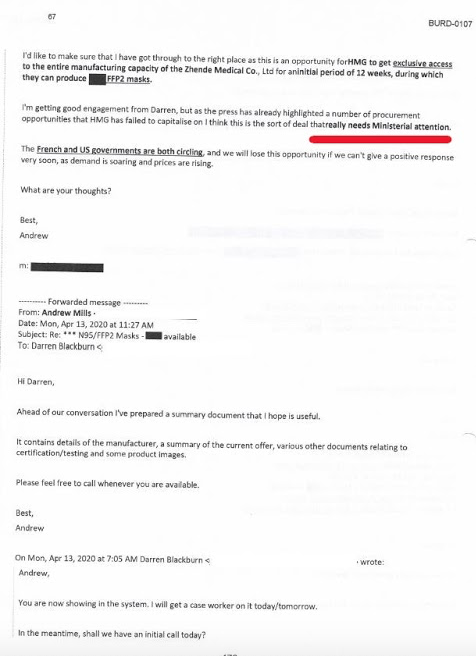 But that’s not the only email raising flags about how Ayanda secured the deal.

Contracts were given despite the bar being low for certain companies

In an email with the subject heading “Feedback from the 1800 Meeting”, it states that a decision was made to proceed with Ayanda despite questions over a ‘lowering of the bar’: 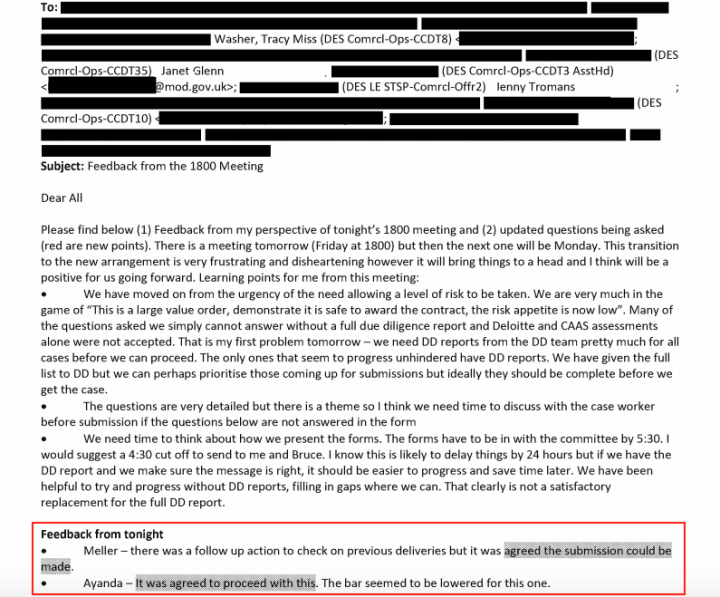 However, after further investigation, it appears that Ayanda was prioritised over an original offer from Prospermill. The decision was made at the request of one person: Andrew Mills, named in The Good Law Projects, skeleton argument.

It was requested that the contract went to Ayanda

According to documents submitted as evidence in the legal action case, on 21 April 2020 it was requested that Ayanda get the contract over Prospermill. 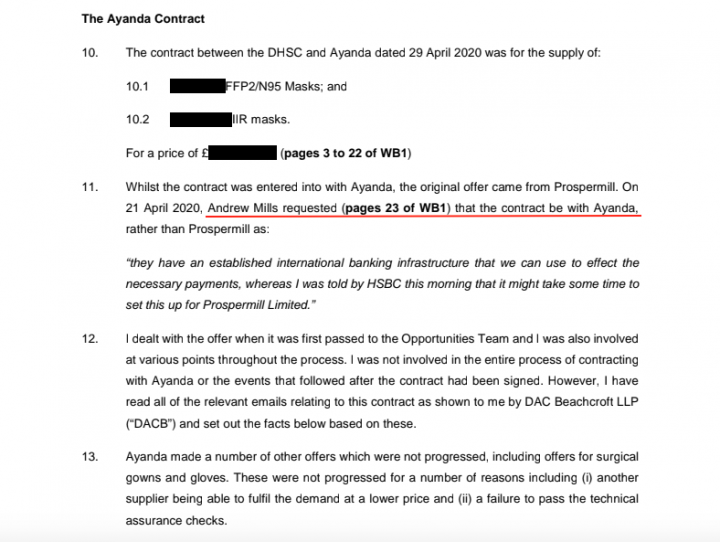 It was a decision that was made after conversations that the DHSC had with HSBC. But this wasn’t the first bid Ayanda had made. The company had made several bids for surgical gowns and gloves which were not ‘progressed’. These bids weren’t taken further because of two reasons: 1. Another supplier was able to do the job at a lower price or 2. Ayanda failed to pass technical assurance checks.

This is the cost of cronyism

Speaking to the The Good Law Project, they told us:

For ordinary people, the pandemic was a tragedy. But for well-connected VIPs it was the chance of a lifetime – huge fortunes were up for grabs. What this civil servant is saying is that it became more of a tragedy because so many VIPs – overwhelmingly introduced by Ministers – were interfering with civil servants’ ability to purchase the PPE needed by healthcare workers on the frontline.

In fact, The Good Law Project has claimed that the evidence the government put forward in it’s legal cases has been incoherent and have called for access to WhatsApp messages:

So far, Government has provided partial and incoherent evidence, heavily redacted. And key items are missing from the evidence we’ve received – in particular no Whatsapp messages, text messages, file notes or submissions to ministers are included. If ministers were pushing civil servants to prioritise PPE contracts to politically connected suppliers, then this information is highly relevant to the case.

The Good Law Project will be back in court in May when the fight for truth and transparency continues. You can read its argument and the evidence disclosed in court in full here – including the emails.

How saving, not slaying, the world’s giants could secure our children’s futures

We need to smash Starmer and Johnson’s disgusting duopoly. That’s why I’m running for London mayor.

The will of the people is clear: the Irish border must remain fully open and Westminster can get stuffed