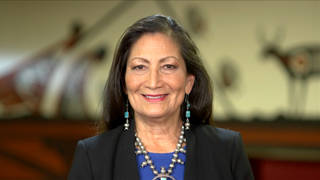 Indigenous communities across the United States are closely following the Senate confirmation hearings of Congressmember Deb Haaland, President Joe Biden’s pick to lead the Interior Department, who would become the first Native American to serve as a cabinet secretary if she is confirmed. Haaland is a tribal citizen of the Laguna Pueblo, and the prospect of an Indigenous person leading the federal department with broad oversight of Native American affairs has galvanized support for her in Indian Country. Several Republican senators have grilled Haaland over her past comments opposing fracking, the Keystone XL oil pipeline and other fossil fuel projects, attempting to paint her as a “radical.” Journalist Julian Brave NoiseCat says there is a deep irony in Republican attacks on Haaland. “As soon as we get the first-ever Native cabinet secretary nominated, conservatives act like we’re going to take away their land and their way of life,” he says.