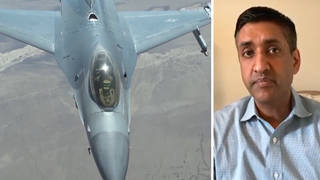 Congress is set to override President Trump’s veto of the National Defense Authorization Act, the $740 billion annual defense policy bill that funds the U.S. military. Trump vetoed the legislation last week over objections to liability protections for social media companies and because he did not want to rename military bases currently named for Confederate generals. Democratic Congressmember Ro Khanna says Trump’s reasons for vetoing the bill are “disingenuous,” but that he will not be voting to override the veto. “The bottom line is $740 billion is way too much defense spending,” says Khanna. “The priorities are wrong.”