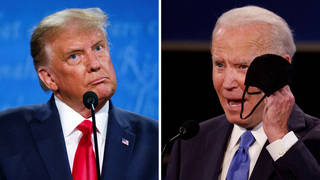 President Donald Trump and former Vice President Joe Biden met in Nashville, Tennessee, on Thursday in the second and final debate of the 2020 campaign. It was a more subdued debate than their first clash, when Trump refused to abide by the rules and interrupted Biden at least 128 times. Thursday’s debate was moderated by NBC’s Kristen Welker, who began by asking the candidates about COVID-19. Biden criticized Trump for repeatedly downplaying the severity of the pandemic, while the president boasted about his handling of the crisis, falsely claiming a vaccine was “ready” to be deployed within weeks. Epidemiologist Dr. Ali Khan, dean of the College of Public Health at the University of Nebraska Medical Center and former director of the CDC’s Office of Public Health Preparedness and Response, says the political divide on how to deal with COVID-19 would be “unimaginable” for any other disease. He also says the Trump administration’s aims of reaching “herd immunity” by letting the virus run rampant in the U.S. is cruel and scientifically unsound. “That is the most unethical, disastrous approach possible,” he says.