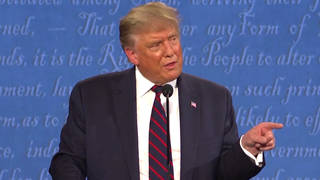 “It’s a rigged election,” claimed President Trump when he and his Democratic challenger Joe Biden were asked about election integrity during last night’s debate as the two men sparred over mail-in voting. Trump ended the debate by calling for poll watchers. We speak with Kristen Clarke, president and executive director of the Lawyers’ Committee for Civil Rights Under Law, who says Trump is promoting unlawful intimidation and voter suppression, and has vowed to go to court to block any attempt to discourage or block people from freely casting their ballots.