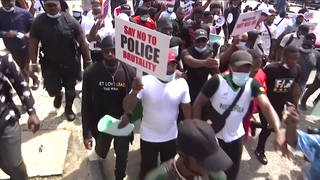 Mass protests against police brutality continue in Nigeria after security forces shot and killed 12 peaceful protesters in Lagos this week. Video widely shared on social media shows security forces firing directly into a crowd of demonstrators in Lagos singing the country’s national anthem. Authorities have imposed a curfew to clamp down on the growing demonstrations, which started as a demand to disband the notorious police unit known as the Special Anti-Robbery Squad, or SARS, but which have since grown into a wider movement against police brutality and official impunity. “We are asking for justice. We are asking for our lives to be preserved, not to be killed arbitrarily by these officers of state,” says lawyer and human rights activist Aderonke Ige, who has taken part in the protests. We also speak with Omoyele Sowore, who says young people in the streets are also confronting other systemic issues. “They are fighting against police brutality, but they are also fighting against army brutality, they are fighting against unemployment, they are fighting against the incompetence and indifference of the regime that has been in power,” he says.