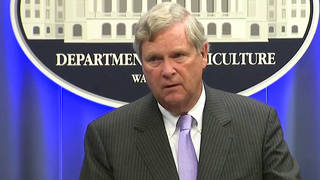 Progressives and environmental and labor activists are objecting to President-elect Joe Biden’s selection of Tom Vilsack to be his agriculture secretary, reprising the role he held in the Obama administration. Those opposed to Vilsack’s nomination say he has a record of supporting corporate interests over those of farmers, loosening regulations and backing genetically modified, herbicide-resistant crops. The NAACP has pointed to Vilsack’s role in firing former USDA official Shirley Sherrod in 2010 as disqualifying. Biden’s pick of Vilsack is a missed opportunity to reshape the U.S. Department of Agriculture, says Ricardo Salvador, director of the Food and Environment Program at the Union of Concerned Scientists. “Going back to a secretary of the past is not the way to strike in a new direction. That is status quo.”

Astra Taylor: Biden Can Cancel Student Debt on Day One. Movements Must Make Him Do It.

“He Wants Violence in the Streets”: Trump’s “White Supremacist Project” on Full Display at Debate